Go Down Swinging: That’s a “Well-Done”

In the parable of the talents (Matthew 25:14-30), Jesus gave the illustration of three servants who were given money to invest. Two of them earned good returns. With the World Series coming up, you could say the first servant hit a home run and the second had an RBI double.

The third servant in the parable was scared to make a wrong move so he made sure he didn’t lose the money. You could say he refused to swing the bat, hoping for a walk, and was called out on strikes. The coach was not happy.

I’ve always wished Jesus had introduced a fourth servant. What about a guy who invests the money and loses it? He swings with all his might but strikes out. Does the master say, “Poorly done, good and faithful servant?” 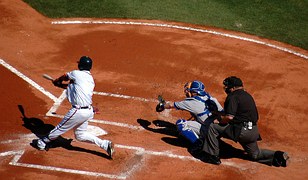 I’ve been mulling that one over. Maybe Jesus didn’t include the servant who tries and fails because He’ll make sure there is a return of some sort on our investment. Maybe He congratulates us on the fact that we gathered the courage to act. Maybe he’s telling us that if we make the effort to step out in faith and use our talents for Him, our willingness to serve contributes to eternal victories.

God gives us all kinds of abilities, and He wants us to use them for His glory. Those of us in ACFW were born to communicate through story. We may never sell a blockbuster novel, but we pour words into our stories and blogs, striving to honor Jesus.

Some agents and editors will love our work. Some won’t. Our readers let us know what they like and what they don’t.

When readers tell me how I’ve encouraged them, that’s like a “Well done, good and faithful servant.”
By faith, I invest time and labor in my God-given talent to write. He is the one who makes my writing profitable—for someone. I step up to the plate, swing the bat, and I either…

Jesus sees every word I write for Him. I do it for His glory. If the world doesn’t buy it, that’s okay. As long as it’s for His glory it’s “well done.”


Posted by Linda Sammaritan at 8:38 PM No comments:

I’m not a fan of poetry. Never have been and I feel most certain I never will be. Too often I struggle to understand it, as in I haven’t a clue what it’s about. Anyway, in a moment of either weakness or great wisdom—I’m not sure which—I decided to write notes to my absentee high school Sunday School students in the form of a poem.

The weekly task proved to be a chore that I didn’t have the time or inclination to endure as my poetry-composing skills required a chunk of time for even a semi-passing result.

So, I shelved the weekly poetry challenge, pulling out the weak poetry-writing skills only for a special occasion here or there. I composed a poem when our pastoral family left, to commemorate our time spent journeying together. I loved the end result, feeling that it really captured the occasion. If I could find it, I’d share it with you, but too many computers have come and gone since I crafted the sentimental verse. I fear it’s gone forever.

Years later I came upon a job opportunity writing web content for businesses. While I had less than zero interest in such a proposition, it sounded perfect for my friend Rhonda. She agreed, applied, and received a job offer which she quickly accepted. While I was happy for Rhonda, I couldn’t help but audibly groan at the type of writing the position called for. I barely silenced the blechs, yucks, and ewws crawling up my throat when she offered me some assignments. I managed a sufficiently polite, “No thank you.”

Jump forward a year. My part-time job had become a bit more part-time than in the past, making money a little tighter than usual. Gritting my teeth just a bit, I asked Rhonda if she by chance needed another writer. Seems the company had just taken on a new client. “You may have them if you want,” she announced.

I’m pretty sure want did not describe my mental or emotional state at the time, still, I accepted. Rhonda passed along a detailed (ahem . . . boring) set of instructions for writing four to five blog posts per month. I sloughed my way through the first couple of months, racking up far too much time staring woefully at the computer screen. But I managed to produce presentable content that the client approved. Soon one client became two. And then without any warning, my shrinking part-time job ceased.

By now I knew I could produce business-related short articles and e-newsletters. It still wasn’t the type of writing I yearned to immerse myself in, but it was writing. And the success I’d achieved produced a satisfying sense of accomplishment. I took on the challenge of more clients, more complex subject matters, and dug into topics I never dreamed of researching let alone writing about. My writing skills expanded and deepened, the “muscles” bulked up, and my confidence grew.

This month marks five years of “business writing” with over 600 hundred completed assignments under my belt. Some days I actually like what I’m writing about. I’ve learned so much through the required research, many things that have proven helpful to my journey as an indie author. I still send up a cheer each month as I send off the last assignment, but I spend far less time dreading the work and almost no time staring at a blank screen.

It’s been a while since I’ve written a poem. But if asked to do so tomorrow, I’d deem the task an adventure and tackle the assignment without one yuck.

Between now and Christmas, I challenge you to write something out of your comfort zone. Something as different from your normal word content as possible. Serious or silly, whimsical, complex, or poetic, choose a genre or format that will challenge your writing skills. An be sure to save it in multiple places, for future reference, as you never know when it will come in handy as either inspiration or a teachable moment.

Beth connects with the YA crowd via substitute teaching and through her “back booth” office at the local fast food joint, and by reading YA fiction.

She's a "cheerleader" for saving sex for marriage and for "renewed waiting" because it's never too late to make wiser choices. She writes and speaks about her experiences as a "foundling" who located her birth parents and is making up for lost time with her biological family. Find her at BethSteury.com and on Facebook at Beth Steury, Author.

When did you fall in love with good books?

It happened to me in the fifth grade when a teacher put me in charge of the school library. I attended a small rural school whose library operated on the honor system, so everything was a mess: books without library cards and cards without books, shelves with books stacked every which way and books piled on the floor, text blocks without covers and covers without text. My teacher explained the shelving scheme and card system, then gave me an hour a day to set things right.

That assignment immersed me in the world of books for the first time. I read dozens of books during that stint, including the “Hardy Boys” series by Franklin W. Dixon. Those books transported me to times and places quite different from my own, and I relished each new adventure.

In high school, I learned that Franklin W. Dixon was a pen name used by various authors who wrote the “Hardy Boy” books. Likewise, Nancy Drew was a pen name that a variety of authors used to write detective books for adolescent girls. I wanted to do that, too.

I had another pivotal encounter during my high-school years. During my junior year, I felt God calling me to ministry. I supposed that meant I had to abandon my love of writing. I met with my pastor to admit my dilemma.

He smiled and said, "I don't see why you have to choose. I do both." With that, he opened a file drawer and showed me tear sheets from dozens of magazines that had published articles he had written. "When I preach, I'm able to share the truth with a few hundred people," he said. "But when I put that message in a magazine article, I reach thousands--perhaps tens of thousands. So I do both."

That day, I answered God's call to become a Christian writer.

The eagerness to write adventurous stories comes back to me every time I read a good novel, regardless of the genre, so I confess I’m still smitten. And I'm still answering God's call. What about you? When did you fall in love with good books? What won your heart? And how does that affect the writing you do?