Last summer, my wife and I visited the Creation Museum (if you haven't yet, you should). In the book store, I saw several books dealing with the topic. Then, my eye landed on a set of three novels, the Dinah Harris series by Julie Cave. These stories looked up my alley and similar in emphasis to what I'm writing myself. So this month, I have the honor of interviewing Julie Cave.

JR: How did you get started writing Christian fiction? Was this a lifelong dream, or something that God put on your heart at the right time?
JC: I have always been a writer, since I could pick up a pencil and jot stories down. I wrote four novels while at high school, and all along I dreamed that one day I'd be able to write stories for a living. However, the practicalities of life got in the way. I went to college, got a job, and got married. Writing took a back seat until I became a Christian at the age of 25. As I thought about how I could serve God it occurred to me that the only real talent I had was for writing. I decided to devote this talent to God's service, and began writing Deadly Disclosures the following year.

JR: How did you become a Christian?
JC: I grew up in a Christian home but as I grew older, I began to see Christianity as a set of rules and regulations designed to curb my fun. When I went to college, I began to live my life the way I wanted. I turned away from Christianity totally, devoting my life to having fun and accumulating wealth. I even got married during this time, to a non-Christian, despite the little voice in the back of my mind that told me it wasn't a good idea. Unsurprisingly, after only a few years our marriage had deteriorated to the point of separation. We agreed to get a divorce. I realized that I had done a spectacularly bad job of running my own life. A mutual Christian friend invited us to a Bible study, in a last ditch effort to save the marriage. We agreed, and both became convicted of our sinful pride. We became Christians, reconciled and just celebrated our tenth wedding anniversary.

JR: I know you're from Australia. Did you do most of your research for your series -- set here in the States -- on-line? Or did you fly over here and research the old fashioned way?
JC: Both. I did the majority of my research initially online, and then visited the States for the launch of my first book. There wasn't much that was lost in translation, apart from toning down my main character's dry sense of humour.

JR: What inspired you the Dinah Harris trilogy and the creation of the main character?
JC: I have always enjoyed reading and writing about current affairs and topics that are impacting our culture. It therefore was a natural fit to write about such topics from a Christian viewpoint. That's where the ideas for all three books originated. Dinah Harris was such an important character for me – I wanted to create a real, flawed person with a painful past and ongoing problems. I felt strongly that Dinah should resonate with Christians and non-Christians alike. A main character like Dinah can reflect the broken state of humanity, and the hope and grace of God.

JR: In a promo for a webinar you had earlier this year, you covered how you use your writing as a witnessing tool. Could you give us a summary or any pointers?
JC: My writing, as I've mentioned, covers current topics from a Christian viewpoint. I talk about issues such as alcoholism, depression, euthanasia, eugenics, domestic violence and self-harm. I talk about what God's Word says about such issues, and also that it's only in God you can find healing and restoration. I also give a reasoned defense of the Christian faith in my books. I discuss the burning questions plaguing people today: can the Bible be trusted? What about evolution? Is Jesus who He says He is? Isn't the earth billions of years old? The truth is that despite many attacks, the Bible has always stood up to scrutiny and is the infallible Word of God. There are answers to all of these questions. I also include a clear gospel message in each book, which is the ultimate goal of mine. I pray that non-Christians are challenged by my books and seek out God for themselves.

JR: One thing you've written about is the possibility of laws being passed so pastors can't address homosexuality or abortion from the pulpit let alone outside the church. A possibility, I'll add, that I consider very likely. What are things like in Australia concerning these matters?
JC: Australia is embarking on a slippery slope in this regard. A Victorian pastor was charged under vilification laws for speaking out about Islam. Eventually, the conviction was dismissed on appeal, but the erosion of free speech is happening very visibly.

JR: How has being a published author affected your life?
JC: I guess I'm certainly busier! I do feel very blessed and God's timing is perfect. As a mother of two young daughters aged three and seven months, writing is a perfect job that I can fit around my family's needs. I've also learned to develop a thick skin – putting material out for the world to read and critique is daunting!

JR: Any ideas on the burner for future novels?
JC: I have more ideas than I have time to write about them! My next book will deal with vilification laws and bullying. I'd also like to write about topics as wide-ranging as human trafficking to post-traumatic stress disorder.

For more information on Julie Cave, check out her website, http://www.juliecave.com
Posted by Jeffrey C. Reynolds at 6:00 AM 4 comments: 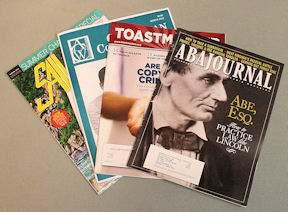 Last month I described the rights that magazines buy most often, and I promised to describe additional rights this month. And even though I'm in the middle of moving, I believe in keeping my promises. So here are other common types of rights.

One-time rights allow the magazine to publish your article or story once. If the publication wants to print it again, it must get your permission.

If you grant simultaneous rights, you are probably selling the article or story or poem to more than one publication. As the name implies, simultaneous rights allow several magazines to publish the piece at the same time. They are not the same as reprint rights since this could be the first time you sold the item.

If you don't say what you are selling and the magazine doesn't say what it is buying, it gets nonexclusive rights. This doesn't restrict your ability to sell the article or story or poem again, but it gives the publication the right to reprint the piece in subsequent editions of its magazine without further payment. You can also explicitly agree to sell nonexclusive rights.

A work-for-hire doesn't belong to you and never did. (I discussed works-for-hire in my November 25, 2010 post.) The end result is similar to selling all rights. However, there are times when works-for-hire are better than selling all rights. That's because some magazines allow the writer of a work-for-hire to publish it elsewhere. Make sure you read your contract to see what you can do.

Because it's important to know your rights.

There are two women walking into a grocery store. One woman is wearing plain black flats on her feet, and the other is wearing platforms exploding with flowers. Which one has a better chance of being noticed?

Certainly, I would notice the woman walking around with a bed of flowers on her feet. I might have wondered where she found such bazaar shoes, but she would’ve succeeded with people taking notice.

To wear flats may be sweet heaven for your feet and carefree to your journey, but at the end of the day—they’re still flat and only noticed by your mother—possibly.

The same goes for writing. Two novels are on the deal-of-the-day shelf at a book store. One novel is titled “Cry Me a River,” written by Marjorie DeVries and the other is “The Street Lawyer,” written by John Grisham. Which novel would you pick?

Unless you’re my mother, you’d grab the John Grisham novel without a blink of an eye. John Grisham has an established platform, and I’m…working on it!

So HOW do penny loafer people like me establish a platform worth remembering? Here are some tips, using examples of enthusiastic writer Paulina Paws*, who has a passion for cats:

P – Publish. Since Paulina already reads Cat Fancy Magazine from front to back every month, she knows what kind of articles they publish—articles for people interested in all phases of cat ownership. Paulina should search for submission guidelines for Cat Fancy Magazine, and put forth her best effort to get articles published in Cat Fancy Magazine. BUT, she should also research other cat-interest publications, and submit her feline articles to them, too.

L – Learn. Paulina should learn as much as she can about cats, and surround herself with other cat lovers to observe great characters for her next novel.

A – Action. Actions speak louder than words. If Paulina donated a few hours a week at the local humane society, she may find lots of cat lovers in her midst, who are looking for a great novel to read. Not to mention all the cat drama she’ll be exposed to.

T – Twitter. Paulina tweeted, “I heard they just found a new breed of cats!” #catbreakingnews. Follow Paulina Paws on Twitter. Paulina can gather followers of her tweets and gain exposure, so that when she tweets “Check out my new suspense novel ‘A Cat among Us’” #bestsellercatnovels—her followers will hopefully go out and buy her novel.

F – Free. That’s right! Free. Miss Paws could generously donate a cat gift basket for the local elementary school auction on Friday. It could include cat nip, meow mix and a copy of her new release “A Cat among Us.”

O – Oh, a Website is a Must! As soon as possible, Paulina should create a website www.paulinapaws.com that tells all about her passion for cats, novels she’s writing and/or written, how to contact her and definitely include a few pictures of cute cats.

R – Release a Video Series. A great way to attract people is through videos on You-Tube. Paulina could create a video series on cats. “Cats Gone Wild,” “Dude, Where’s My Cat?” and “Cat in My Hat”. Oh, the possibilities are endless. The best part is—if Paulina owns a video camera and has access to the web…it’s super cheap to produce!

M – Meet. Paulina should meet people who share her passion for cats. That means, getting involved with cat-lover groups. Speaking at cat conventions and passing out her business card to everyone she meets there.

Catchy platforms rule over plain flats any day of the week!

*Note: Paulina Paws is a fictional person, created to be used strictly as an example. Thank you.