The Writing Toolbox: One App to Rule Them All?

We all have our favorite writing apps, note taking apps, picture apps, and apps that keep track of ideas. In fact, regardless of your technology platform, writers have many choices these days. “If it ain’t broke, don’t fix it” might not really apply as strongly as it did before app stores became populated with so many apps for writers.

These days, Microsoft Office is not the only writing app out there. Yes, once it was the staple of the writing industry (well, besides pen, paper, or typewriter), but now it’s just a choice among many.  As Mr. Scott of the starship Enterprise once said, “How many times have I told you? You need the right tool for the right job.” (Star Trek V, for those wondering).

Because I write on the Apple technology platform, I will be suggesting a few apps that I have found useful. By the way, Apple does a great job of categorizing “writing apps” on their respective app stores (Mac App Store vs iOS App Store).

Apple Pages, Keynote, and Numbers are the “Apple versions” of Microsoft Office. These three apps have come along way since they were first introduced as the iWork suite back in 2005. The bonus here is that all three apps are free. When funds are limited, they can give those using Apple technology a ready to use set of applications that are robust in options and not considered entry level software.

The bottom line here is that many apps specialize in different purposes: sketching out visuals, mind mapping, giving you a place to organize your ideas, and to actually construct your story. Everyone has their favorite app, but be sure not to limit yourself. Many apps offer free trials or a limited free version that allows you to test how useful it would be to your needs.

Points of Discussion: What are some of the apps you use for your writing needs?

Write on, Write often, and Write to make a difference!
-Darren Kehrer 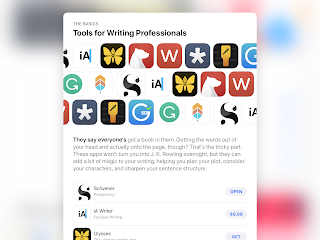 Imposter Syndrome Is a Real Thing, and Yet . . . 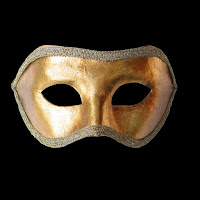 When I meet people for the first time, sometimes our conversations turn to career. I tell them I’m a book editor, and then if they’re remotely interested in learning more, we might have to first get past their idea that an editor’s only task is to find and correct typos.

But do you say it with full confidence?

Knowing what line editing is, I like what the author of this article said about it as opposed to substantive or copy editing: “Line editing skills are all about our writing—as a whole.” But may I just tell you how intimidating that statement could be to me some days, skills or no? I could easily ask myself, Who am I to give input into anyone’s writing as a whole? Someone might find out I don't really know what I'm doing!

This, my friends, is an example of imposter syndrome, and I have examples from real-life experiences, too—not just as an editor but as a writer. Maybe especially as a writer. Sometimes when I tell someone I’m a writer, the next question is, “So what have you published?” And then my answer is thin because they’re talking about work published under my own name.

Yet this imposter syndrome is by definition unfounded. It's like phantom pain; there, but not from a source that exists. And it doesn’t consider the degrees we might want to assign to it, like beginning writer or unpublished writer. It sucks up the whole of us. Yet even the most gifted, published, successful writer can take a dive into the imposter syndrome waters. We know that because some of them have told us so!

Why is it so easy for writers to say to themselves, Who am I to think I can write anything someone would want to read? I think when we do that, we’re forgetting who we are. So I’m going to be brave enough to tell all of us who I think we writers (writers because we write) are—or in some cases, need to be to fight imposter syndrome:

If you write—for pleasure or for publication—remember who you are, and, if you’re afflicted, kick imposter syndrome to the curb. It might not be easy, and you might have to fight almost constantly, but then again, there’s this: “Blessed are those who trust in the Lord and have made the Lord their hope and confidence” (Jeremiah 17:7 NLT). Start there. 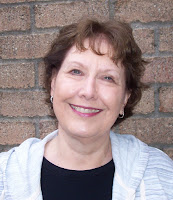 Jean Kavich Bloom is a freelance editor and writer for Christian publishers and ministries (Bloom in Words Editorial Services), with more than thirty years of experience in the book publishing world. She is a regular contributor to The Glorious Table, a blog for women of all ages. Her published books are Bible Promises for God's Precious Princess and Bible Promises for God's Treasured Boy. She and her husband, Cal, live in central Indiana. They have three children (plus two who married in) and five grandchildren.
Posted by Jean Kavich Bloom at 10:39 AM 1 comment:

In other blog posts I’ve referred to the late John Gardner, long-time professor of creative writing at Oberlin College and elsewhere, who left us several classic books on the art of fiction. His life was cut short by a tragic accident in 1982, yet his books continue to share timeless wisdom. Consider this passage from The Art of Fiction (Vintage: 1985):

The value of great fiction…is not just that it entertains us or distracts us from our troubles, not just that it broadens our knowledge of people and places, but also that it helps us to know what we believe, reinforces those qualities that are noblest within us, leads us to feel uneasy about our faults and limitations (31).

Gardner believed that all great fiction sharpens our moral sense. While he dismissed preachy fiction,  he had a keen eye for the moral purpose of an author. If he found none, he felt the author had lost a great opportunity because “the ultimate value of fiction is its morality.”

It's true: Great novels prod the reader's conscience. Great authors shine the spotlight of accountability on the reader's life. Their stories become an integral part of who the reader is.

So when we embark on the adventure of writing a novel, I believe we need to ask ourselves, “What eternal issues are at stake here? How will my characters be tested by those issues? And how will Christ enable them to come through those tests stronger, more mature, and more like Him?”