A Writer's Guide to the First Amendment: When Actions Speak Louder than Words 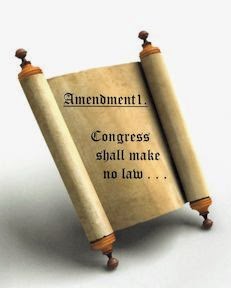 As writers, we deal with words. After all, the pen is mightier than the sword, as Edward George Bulwer-Lytton said. So why do we care if the First Amendment applies to actions?


It’s 1984, and you want to protest the policies of the Reagan administration. You could write a letter to your Congresswoman, but will she read it? Or you could write an article, but what if every magazine you submit it to rejects it?


There has to be some way to get the administration’s attention.


Then someone suggests burning the American flag. Unfortunately, the law says that’s a crime.


The pen may be mightier than the sword, but actions do speak louder than words.


Still, you’re a writer, not a protester. You want to know how the First Amendment applies to the words you put on paper.


Stay tune for next month’s post on freedom of the press.


Kathryn Page Camp is a licensed attorney and full-time writer. Her most recent book, Writers in Wonderland: Keeping Your Words Legal (KP/PK Publishing 2013), is a Kirkus’ Indie Books of the Month Selection. Kathryn is also the author of In God We Trust: How the Supreme Court’s First Amendment Decisions Affect Organized Religion (FaithWalk Publishing 2006) and numerous articles. You can learn more about Kathryn at www.kathrynpagecamp.com.
Posted by Kathryn Page Camp at 12:00 AM 1 comment:

What I Learned from Suspense


By Kelly Bridgewater
As in my previous post, I mentioned my love of mysteries. It’s what I enjoy reading, and my chosen means of writing. My latest favorite author is Dani Pettrey because of her Alaskan Courage series. I picked up the first one, Submerged, when I saw the recommendation from Dee Henderson on the front. I found out about Susan May Warren’s book the same way. That recommendation on Susan’s books did not steer me wrong, so I decided to try another author.
Since I really didn’t come from a close knit family, I was excited to read a book featuring five siblings who work together in Alaska who love the outdoors. My husband and I have been discussing moving to Alaska for a couple of years now, so the concept of the books intrigued me. Not only do I read the books for enjoyment, but I study the books. I analyze them like I did with texts when I was in graduate school. Here are some suggestions on how to study a book to help with writing:
1.) What about the characters intrigued me?
I enjoyed seeing these same characters over and over. I have grown attached to them, so I pay attention to how Dani describes them. For instance, to describe Kayden, she allowed the readers to view Kayden through the eyes of Jake, the man in love with her. Dani writes, “Jake loved the skill and dexterity with which she moved, or rather glided. Her sculpted arms, though still extremely feminine, were evidence of the strength she possessed—a strength that ran much deeper than mere athleticism. He admired her physical strength, but it was the rare glimpses of her heart that him enthralled” (17). Dani doesn’t give the readers a glimpse of her physical characteristics, even though we do have those sprinkled in, she layers the characters’ strength. This is something I’m trying to mimic with my characters.

3.) How much dialogue is being used?
My main instinct as a writer is to use exposition to tell my story. I mean, come on, the readers need to watch the characters doing things and follow their train of internal dialogue. I have a really hard time allowing my characters to talk while they are looking at a dead body or observing the crime scene. Only when they are interviewing someone connected with the case. Analyzing Dani Pettrey’s book, there is a lot of dialogue to flush out the characters and the action on the page. Most romantic suspense writers do this. Something I have been trying to work on.

4.)   How many different ways can a writer describe something?
For instance, I have a really hard time coming up with words to describe walking. I use stepping, gliding, strolling way too many times to count. Something I will have to go back and fix. I pay attention when writers use different words to describe this action. Dani Pettrey uses words such as: sidled up beside her, jumping up and running, grouped everyone together, lowered first, as Landon approached, pacing, he rushed forward, he sauntered to the doors . . . The list goes on and on. With practice, I hope to become better at describing the action the character is actually doing.

5.)   What makes the book different from all other suspense books on the market?
As an avid suspense reader and writer, I try to find books that don’t have the same cliché book plots. You know the ones where you can figure out the murderer before the story is over. That is why I love Steven James’ Patrick Bowers series. I can’t figure out the killer. Even though I try to follow the red herrings and clues throughout. Dani Pettrey amazes her audience with a fast paced novel involving dead bodies and allowing a family to stick together and solve the crime. The story usually centers on forgiveness and second chances. Just like I enjoy.

What do you look for when you are studying your favorite writer’s work? I hope these suggestions will help you become better writers and readers. I have a review of Dani Pettrey’s latest book, Silenced, up on Amazon if you want to see my full review on this great book.
Kelly Bridgewater holds a B.S. in English and a M.A. in Writing from Indiana State University on the completion of a creative thesis titled Fleeting Impressions, which consisted of six original short stories. She has been published in the Indiana State University Literary Journal, Allusions, with her stories titled “Moving On” and “Life Changing Second.” In fall 2011, she presented her essay, Northanger Abbey: Structurally a Gothic Novel, at the Midwestern American Society of 18th Century Studies Conference. Kelly’s writing explores the ideas of good prevailing over evil in suspense. Kelly and her husband reside with their three boys and two dogs.
Posted by Kelly Bridgewater at 6:00 AM 2 comments: