The Man in the Arena

President Theodore Roosevelt was a man who pressed on in spite of his critics. He was as controversial for his times as Lincoln was earlier in the nineteenth century and as our President is today. He was a soldier, an adventurer, a policeman, and much more. He was brash, bold, and biased.

If he were active in politics today, I would oppose many of the policies he fought for. And if I voiced my criticisms of him, he wouldn’t care.

How do you deal with the critics in your life?

Not only those who review your writing. Think back over a lifetime, and the various critics you’ve come across. Individuals in your church. In your extended family. Your boss. Fellow employees. Your professors in college. That know-it-all in fifth grade. Your siblings. Your parents.

We each have different coping mechanisms in response to criticism. Some of us can cheer ourselves on if we’re personally discouraged, but we’ll fold at the first hint of dissent from someone whose opinion matters to us. Others of us can confront our outside critics, but will toss any flawed efforts into a figurative trash can if we can’t meet our own high standards. And then there are those who cave at any negative comment by anyone.

Regardless of the category that fits you best, if you quit an endeavor because someone, yourself included, pointed out the imperfections, you lose.

I love the following quote from Roosevelt. Generations who have followed him title this passage, “The Man in the Arena.:

"It is not the critic who counts; not the man who points out how the strong man stumbles or where the doer of deeds could have done them better.

"The credit belongs to the man who is actually in the arena, whose face is marred by dust and sweat and blood; who strives valiantly; who errs, who comes short again and again because there is no effort without error and shortcoming;
"But who does actually strive to do the deeds; who knows great enthusiasms, the great devotions, who spends himself in a worthy cause,

"Who at the best knows in the end the triumph of high achievement, and who at the worst, if he fails, at least fails while daring greatly, so that his place shall never be with those cold and timid souls who neither know victory nor defeat." 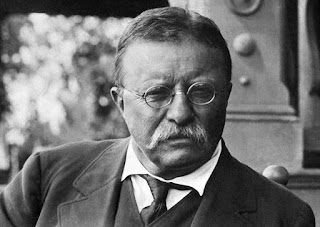 I don’t want to be one of those “cold and timid souls.” The fact that you’re a member of ACFW tells me you share the same feelings.

We write because God put it on our hearts to do so. And if God put it on our hearts, then it's worth the struggle of sharing that message, of learning this craft of writing, of practicing to get better, and of opening ourselves to the vulnerable position of the public’s opinion—agents, editors, critique partners, reviewers—with heads held high.

Maybe you have a bestseller. Maybe no publisher ever wanted your work. But you haven’t quit. Win or lose, you stand in the arena.

Posted by Linda Sammaritan at 6:00 AM 4 comments:

The Museum of Good Intentions

During our courtship, Maribeth and I spent hours talking about what the future might hold. We still aspired to do meaningful things for the Lord, though we were both in our sixties and had retired from full-time ministry. What might we do together? How could we make the most of the days God might apportion to us? These questions opened some rather creative visions to us.

In the midst of those conversations, Maribeth asked why I had not undertaken a writing project that I had been mulling for several years. I laughed and said, “Honey, I’ve relegated that to the museum of good intentions.”

You know the place. You’ve often visited it, I’m sure, and ensconced some lovely mementos there. Unfinished portraits, rough-hewn statues. Perhaps you dust them from time to time, but you have no serious intention of bringing them out of those polished marble halls to complete the work of your imagination.

Maribeth keeps me mindful of it. When I muse aloud about some project left undone and get that faraway look in my eyes, she will fix me with those penetrating eyes and say, “Is that in the museum, too?”

These weeks of isolation at home would be a good time to walk through your own museum. What treasures languish there? Why not trundle them out the door and see how they look in broad daylight?