Writing Outside Your Culture: Researching Location, Part I 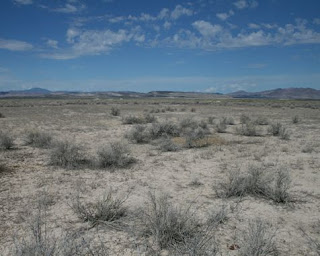 As I mentioned in last month’s post, my protagonist in Desert Jewels lives in Berkeley, California when the Japanese bomb Pearl Harbor. She has a Japanese father and a Caucasian mother, but that is more than enough Japanese blood to send her to Tanforan Assembly Center (a converted racetrack) and Topaz Relocation Center.


I wanted to do on-site visits, but I had a significant problem. Tanforan is now a two-level shopping mall, and Topaz is open desert. That means I had to (and did) get most of my knowledge about both from reading memoirs and newspaper archives. Even so, visiting added a sense of place that I couldn’t get from books.


The books told me that Topaz was isolated and desolate. Being there made it real. It took hours of driving through mountains and deserts to get to Delta, Utah, which was the closest town, and then my husband and I drove another half hour in the car before we reached our destination. The residents of Topaz spent two nights and a day on a train to reach it, with each mile taking them farther away from their beloved San Francisco. After transferring to a bus at Delta, they finally arrived at their destination to find nothing but rows and rows of tar-papered barracks in the middle of nowhere.


I grew up in a small town in the Upper Peninsula of Michigan, and the isolation at Topaz suffocated me. Think how it must have affected people who were born and raised in a major metropolitan area.


Then there was the size. I already knew that the residential part of the camp was a mile square, but that was just a number until I walked and drove it. Now I can’t imagine how they managed to cram 8,000 people, two elementary schools, a high school, a hospital, and a number of offices in such a small space. More suffocation. 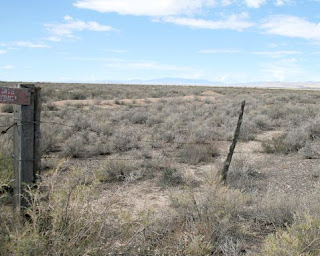 Topaz was disassembled after the war, and there is very little left at the site. However, part of the original barbed-wire fence still stands, and it confirmed the impression I got from my reading. As you can see from the picture, there was plenty of space to crawl through, and the residents often did. Not to escape, though. The War Relocation Authority used the surrounding land to grow crops and raise animals to feed the people in the camp, and many of the residents worked outside the fence in the agricultural areas. Although the Topaz Times contained frequent pleas not to climb through the fence, many residents used that route as a shortcut to their jobs. (And no, the fence was not electrified.)
Dust storms were a frequent experience for the Japanese Americans who lived in Topaz and other desert camps. Crazy as it may seem, I wanted to experience one while I was there. Unfortunately, it had rained the night before so the dust stayed put. Driving through Utah and Nevada the next day, however, we did see a number of dust clouds in the distance.
At Tanforan, the inhabitants would have felt a different kind of isolation. They were in the middle of a bustling metropolitan area that was closed to them. Still, during the five months they lived there in horse stalls or barracks with gaping holes in the walls, at least they were still in their home state of California. And they were close enough that their Caucasian friends could visit them occasionally.
The building in the middle of this picture is the current BART station. Imagine that it is the grandstand roof and you are sitting there, as many of the residents did in 1942. They could see civilization all around them, but they were forbidden to join it. 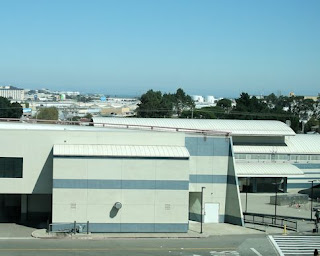 
From our hotel near Berkeley, it took a hotel shuttle, a bus, the BART (with one transfer), and 2 ½ hours to get to San Bruno, where Tanforan is. On the way back, every connection came right away, and even the hotel shuttle arrived just as we were getting ready to call for it, so the return trip took only 1½ hours. The Japanese Americans made the trip by bus and with no stops or connections, but they also had to contend with traffic. I’m assuming it took them at least two hours, and probably much longer. Hours filled with apprehension and uncertainty.


I did the trip backwards for practical reasons, but at least I did it.


As writers, we can’t always visit the locales we write about, but we should if we can.


Even if everything has changed.


Kathryn Page Camp is a licensed attorney and full-time writer. Writers in Wonderland: Keeping Your Words Legal was a Kirkus’ Indie Books of the Month Selection for April 2014. The second edition of Kathryn’s first book, In God We Trust: How the Supreme Court’s First Amendment Decisions Affect Organized Religion, was released on September 30, 2015. You can learn more about Kathryn at www.kathrynpagecamp.com.
Posted by Kathryn Page Camp at 12:00 AM