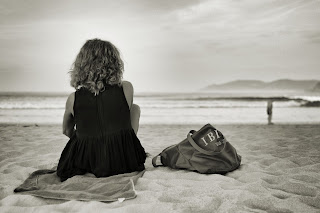 As an editor, I often encourage authors to describe their characters as creatively as possible. When a book I'm reading for pleasure interrupts the action to tell me Jane is five foot two with eyes of blue and hair so blond, while the poor heroine is tumbling into quicksand with assassins closing in…well, I’m thinking there has to be a better way.

And when Jane’s description is factually reported in the very first paragraph as though immediate description is a rule (it’s not), we get something like this: Jane strolled along the beach, shielding her light-blue eyes against the sun with one hand, her slim five-foot-five frame bending every few feet to lift another seashell for her collection. She paused and tucked a strand of long, ash-blonde hair behind one ear.  The task of describing Jane is now checked off the author’s list, but I'd rather see a little more creativity.

Here are a few possibilities for a more creative approach, using only height and coloring.

·         Show relative height when specific height isn’t important. The couple of inches she had on the shorter man in front of her didn’t matter. What mattered was how she felt when his gray eyes suddenly tilted up to look into hers, making her want to kick off her heels and dive in.

·         Make one character note another character’s description in his or her thoughts or in dialogue. “Date her? Her profile says she’s six feet tall and I’m barely five ten. Those green eyes would always be looking down on me. No way!”

·         Compare one character’s description to another character's in a way that’s relevant to the set up or scene.  Meredith turned her full attention to the man beside her. When Jason was alone, women seemed attracted to his enviable blond hair, blue eyes, and six-foot-one height. But when Paul was there, despite his more common dark coloring and slightly shorter stature, Jason lost them. Paul was the brother who intrigued women apart from his good looks—and they both knew it.

These are just three ideas for more creatively conveying a character’s description. Share some more methods that work for you!

Jean Kavich Bloom is a freelance editor and writer (Bloom in Words Editorial Services). Her personal blog is Bloom in Words too, where she sometimes posts articles about the writing life. She is also a contributor to The Glorious Table, a blog for women of all ages. Her published books are Bible Promises for God's Precious Princess and Bible Promises for God's Treasured Boy. She and her husband, Cal, have three children and five grandchildren.