The (True!) Joys of Having ADD with Member Blogger Dawn Crandall

Most people aren't very surprised when they find out I have ADD.

It probably (and hopefully) answers most of their questions as to why I am the way I am. I'm a tad out-going, think differently than almost everyone else I know, I'm a little unfiltered, and a bit talkative.

And do you know what? I thank God everyday that He made me this way. Because of my having ADD, I get to do what I like to do more than anything else in the world.

I started taking the medication for ADD when I was seventeen years old and a junior in high school. It's true, I needed it pretty badly. I would never would have made it into college, let alone graduate from college, without it. It's rather unfortunate that I didn't learn much in school (like grammar and punctuation--I apologize now for any mistakes you might find in my comma placements!), as I was just scraping by before my junior year, getting my only good grades in the classes or subjects that had anything to do with Art or Creative Writing. But I suppose God had a specific reason for that too. I was also seventeen when I became a Christian, which was the true reason I ended up going to college and majoring in Christian Education.

I stopped taking the medication about thirteen years later. You'd think the medication prescribed to help me pay attention would help me focus on writing a book, right? But alas, no. It did the very opposite. I hadn't thought much about writing at all during those years because I was so entirely focused on everything else. When I did finally stop taking the medication, I realized that it was what had been blocking so much of what any writer needs most! My ability to think outside of what was going on in front of me was literally shut off for all those years. All along, I'd remembered how I had once LOVED writing from as far back as I could remember. It was after reading books like Gone With The Wind by Margaret Mitchell and Rebecca by Daphne DuMaurier as a teenager I knew I wanted to create a book someday.

For the last five and a half years I've been off the medication and spending my time developing my voice and my brand of writing. After figuring out how to hone my "day-dreaming" into actual stories that I wanted to write, it didn't take me very long to figure out that this was what I was made for. I wrote my book and got two agent offers within a week of sending my proposals. I've completed another now, and I am on my third. It's a long waiting game to find out what's going to eventually happen with these books, but I'm happy because I'm writing. And truthfully, I really have never been good at anything else... because drawing doesn't count.

It's true, I'm a bit scatter-brained. In everyday life, I pretty much need to be told what to do and where to be. But I sure can focus on what interests me... and that is brain-storming plots and writing ultra-complex, involved love stories that teach a multitude of spiritual life-lessons, not only to my main character (which I write in first person point of view), but also the reader. 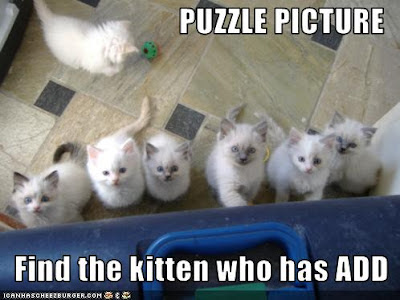 I'm very much like the kitten (and yes, I love kittens and jump at the chance to use them whenever possible) in this picture, who's, in essence saying, "Who cares what everyone else is looking at or paying attention to? I've already found what I love most... and it's this amazing, green jingle ball!"

Writing books is my amazing, green jingle ball. There's nothing in the world I would rather be doing than paying attention to the plot of my current Work In Progress.

(Updated since 2012) Dawn Crandall is the author of The Hesitant Heiress (August 2014), The Bound Heart (November 2014) and The Captive Imposter (February 2015), all part of The Everstone Chronicles series from Whitaker House. A graduate of Taylor University with a degree in Christian Education, and a former bookseller at Barnes & Noble, Dawn didn’t begin writing until 2010 when her husband found out about her long-buried dream of writing a book. Without a doubt about someday becoming traditionally published, he encouraged her to quit working in order to focus on writing. It didn’t take her long to realize that writing books was what she was made to do. Dawn is represented by Joyce Hart of Hartline Literary.
Apart from writing books, Dawn is also a first-time mom to a precious little boy (born March 2014) and also serves with her husband in a pre-marriage mentor program at their local church in Fort Wayne, Indiana.
Dawn is a member of the American Christian Fiction Writers, secretary for the Indiana ACFW Chapter (Hoosier Ink), and associate member of the Great Lakes ACFW Chapter.
The Everstone Chronicles is Dawn’s first series with Whitaker House. All three books composing the series were semifinalists in ACFW’s prestigious Genesis Writing Contest, the third book going on to become a finalist in 2013.
Posted by Dawn Crandall at 6:00 AM