To celebrate Indiana's bicentennial next year, the Indiana State Library is preparing a new literary map of the state. The map will list 200 state authors (in honor of our 200th birthday!) with interesting facts about their life and work. The state's current literary map (shown here) was published more than 40 years ago, and a lot of new authors have appeared on the scene since then. 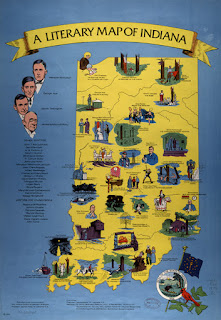 I wonder, Which Christian authors would you nominate for this honor?

Wabash College's 3-volume reference set, Indiana Authors and Their Books, lists more than seven thousand Hoosier authors. The most recent edition was published in 1981, so it's due to be updated as well. Again, which Christian authors (living or dead) do you think should be listed there?

Our place of origin influences the way we write.  Curt Vonnegut said in an interview, "The writing style which is most natural for you is bound to echo the speech you heard as a child...I myself grew up in Indianapolis, where common speech sounds like a band saw cutting galvanized tin, and employs a vocabulary as unornamental as a monkey wrench." If that abrasive working-class dialogue ever surfaces in the stories you write, don't worry. It's natural because you're a Hoosier author.

As the psalmist said, we have "a wonderful inheritance!" (Ps 16:6) Let's be familiar with it--and celebrate our part of it! 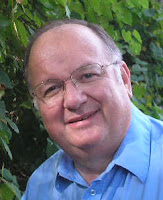 Joe Allison and his wife, Judy, live in Anderson IN, where Joe serves as Editorial Director of Discipleship Resources & Curriculum for Warner Press, Inc. Joe has several nonfiction books in print, including Swords and Whetstones: A Guide to Christian Bible Study Resources. He's currently writing a trilogy of Christian historical novels set in the Great Depression.